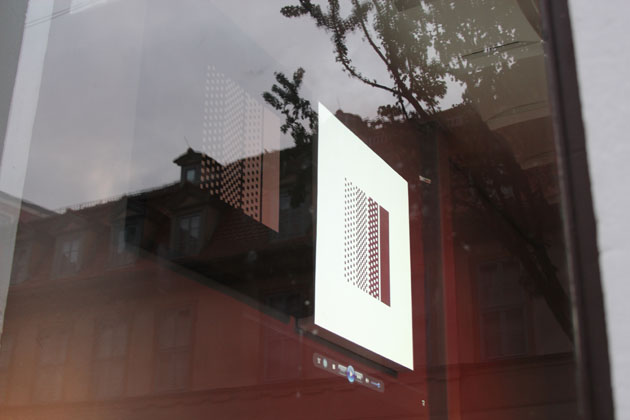 Impulse 101 is a diptych, half painting/half projection, 100% on the internet.

The work begins with the 4 foundational font characters of 8-bit Block ASCII, ░ ▒ ▓ █. It consists of two 100 x 100 cm canvases. The left (black) side is acrylic on canvas, while the right counterpart is a video projection of ASCII art animations utilizing real and faux copy paste glitches in MS WordPad.

Impulse 101 is a conceptual work which begins with the 4 foundational font characters of 8-bit Block ASCII, ░ ▒ ▓ █. These shapes were originally found in the 1979 character set Code Page 437, or CP437, of the original IBM PC.

ASCII art has its origins in 7-bit ASCII which originated in the 1960's. My first encounters with ASCII art were with 8-bit CP437 on Bulletin Board Systems in the 1990's, just a few years before the internet caught on in the consumer sector. The CP437 character set has a total of 256 glyphs; in Impulse 101 I put the parentheses around ░ ▒ ▓ █, the foundational forms which can be seen as the triangle-square-circle of Block ASCII.

The first principle was to appropriate these shapes as my own, using them as 4 small robots whose purpose is to self-replicate and take on new forms. Being symbols, they can slip through the analog and digital world without needing a physical form, they exist as meme nanites, replicating, infesting and building upon themselves.

I began by spreading these symbols in various online locations: embedded in HTML code, in emails, Facebook, YouTube, and on dump.fm. I watched as the symbols were picked up and remixed into new shapes by other users. The symbols bounced around the internet, copy-pasted, blogged and reblogged. In a chance coincidence the Written Images exhibition at LEAP gallery in Berlin had an experimental project taking place on July 1, 2011. The project enabled users to submitted JavaScript code online which would be rendered as 8-bit ASCII and printed as a continuous feed in the gallery. The event was live streamed over the internet, a camera captured each printout, and the printout simultaneously acts as the exhibition catalog. The robots of Impulse 101 got to work mass producing images which poured into the gallery by the thousand.

I formed the symbols into a cube configuration in homage to Malevich. From the JPG's I dragged these cubes half-way into the real world in a painting diptych. The diptych installation is half-digital, half-painted, half in the real world, half on the internet via a projection. In the video half the symbols are ever changing forms, evolving and morphing via newer videos. The video projection is temporal, activating and deactivating the diptych, fluctuating between analog and digital.

The story of these shapes has only just begun; the concept spins and spins on an abstract plane, touching down in different tactile forms, the manifestations of which can never be fully quantified or documented.